DC Comics Before it Became the Behemoth We Know Today 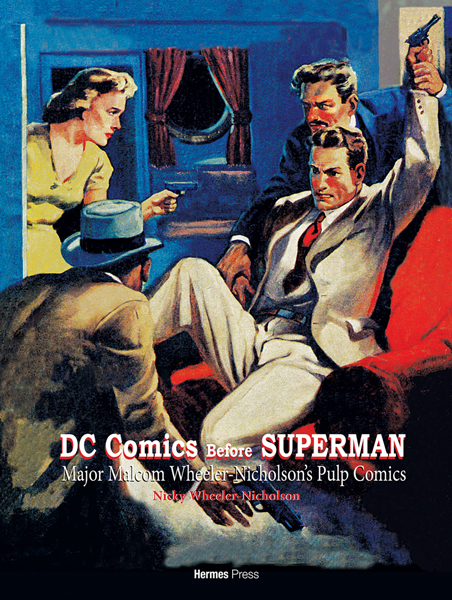 From Hermes Press site: Before Batman and Superman were even a glimmer in Bill Finger and Jerry Siegel’s eyes, Major Malcolm Wheeler-Nicholson created National Allied Publications, which would then go on to become DC Comics; one of the largest comic publishers in the world.

Nicky Wheeler-Nicholson (the Major’s granddaughter and noted comics historian) contributes a historical essay that provides an in depth look at the formation of National Allied Publications and the man behind New Fun, New Comics, and other memorable original comics that predated DC Comics’ inception.  Other contributions include an intro by Jim Steranko (Nick Fury, Agent of S.H.I.E.L.D.) and an afterward by comics historian David Armstrong.

All the comics included in this tome have been painstakingly reproduced and repaired to show how they would have looked back in the 1930s!

This groundbreaking book explores the history of DC Comics before it became the behemoth we know today; the pulp stories that formed the basis for all the different kinds of comics that exist today. Titles included in this historical reprint include Barry O’Neill and Fang Gow (script- Wheeler-Nicholson; art- Leo O’Mealia), Blood Pearls (script- Wheeler-Nicholson; art- Munson Paddock), Foe of the Borgias (script and art- Sven Elven), The Golden Dragon (script and art- Tom Hickey) and more!

As an armchair historian and a comic book fan, I’ve always been fascinated by the intricacies of the earliest days of the comic book form, as well as the companies that originated it. Over the years diving into a variety of investigations into long-lasting companies like Charlton, Fawcett, Marvel, and of course DC, one gets the sense that nothing is as it might seem. In actuality, what might be addressed as fact by some writers is determined much later to be nothing more than spin by some persons undermining others, or it might be successful attempts at perpetuating a fabrication. When delving into the earliest depths of the companies that would eventually become globally known as DC Comics, there has always been this nigh-mysterious character known as Major Malcolm Wheeler-Nicholson.

Comics (in and out of books) had been around for a very long time before anything resembling a comic book industry began to emerge in the 1930s. It is only in light of the pulp magazines that directly preceded them that these crude compendiums of flying pals, ageless priestesses, and inscrutable and vengeful enemies of the human race can even begin to make sense today. Nicky Wheeler-Nicholson’s DC Comics Before Superman: Major Malcolm Wheeler-Nicholson’s Pulp Comics provides the story of one entrepreneur who brought some innovative notions to the comic book table with a foot planted squarely in both the pulp and comic strip camps.

Nicky Wheeler-Nicholson will lead a panel discussion of her book, “DC Comics Before Superman,” at Comic-Con International 2018 in San Diego, the country’s biggest comic book convention, this weekend. The event runs Thursday through Sunday.

Comic book fans love a meaty origins story, and Berkeley author Nicky Wheeler-Nicholson has a heckuva one to tell. It’s not only a true story on the rollicking formative period of a powerful publishing house but also one that gives an inside look at the genesis of perhaps comics’ best-known character, Superman.

Wheeler-Nicholson is the granddaughter of Malcolm Wheeler-Nicholson, founder of National Allied Publications, which later became National Comics Publication, which eventually morphed into DC Comics. She’s a writer, speaker and a frequent panelist at San Diego’s Comic-Con.