Many people have written eloquently about Howard Cruse in the last week since his death, Andy Mangels, Denis Kitchen and Chip Kidd among others. What I want you to know is something personal about Howie beyond the work and the public life—about friendship, family and love. 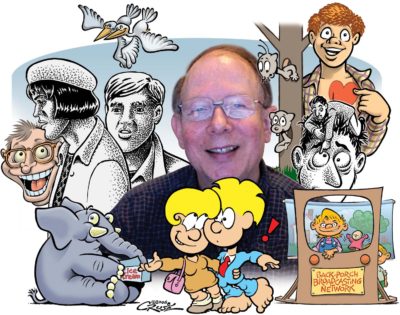 I lived with my maternal grandparents from the time I was born until I was three years old. As a result, I never bonded with my mother and never quite fit in to the new family my mother created. And as much as I would like it to be so I don’t completely fit in with my father’s family either since I did not grow up with them. I have spent a lifetime creating a family wherever I have lived. There are a handful of friends who have been a part of all the pieces of my life and Howard Cruse was one of those friends. I have lost a piece of my heart. 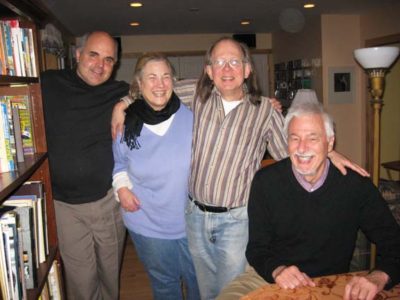 Jason B, Nick, Howie, Dick L. at Howie and Ed’s in North Adams

People in the comics community are often surprised about my friendship with Howard. I first met him over 50 years ago when I was 18 years old. We are both from Alabama and both attended Birmingham-Southern. He noted this to Michael Dooley in an email regarding Michael’s review in Print Magazine of my book DC Comics Before Superman. Howie wrote to thank Michael for mentioning the portrait Howard did of my grandfather, the Major. “Nicky will confirm that, even though she and I first became friends in the late-’60s when I came down to Birmingham from New York to see a one-act play of mine that was directed by a dear friend from my college theatre days. Nicky was in the cast, and we took to each other immediately. But it was decades later when I learned, during a casual conversation about Stuck Rubber Baby, that she had a connection to comics that went way beyond reading them as a kid.” 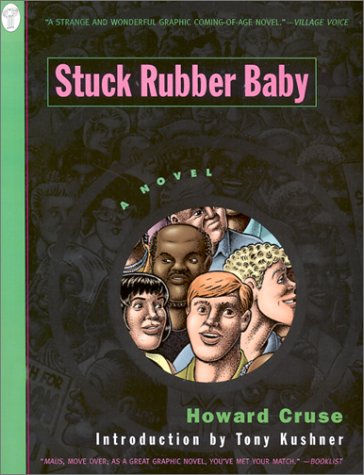 If you are white and from the deep south you carry the schizophrenia that is part of the DNA of being white and being from the south. And if you move away from the south those friends who share that DNA are part of your family. Stuck Rubber Baby is more than a beautiful work of art for me. It has personal resonance.

Howard graduated before I arrived at ‘Southern but I knew how much he was revered. I remember sitting in the black box student theatre listening as only an awestruck 18-year-old can while Howie gave me notes on my character. I have been fortunate to fall in love at first sight a couple of times in my life and Howard was someone I fell in love with—that soul to soul connection, of recognizing and seeing someone for their true being and loving them immediately. And how lucky I was to be loved right back.

There is a Zulu greeting Sawubona that translates to something like “I see you.” The response is Ngikhona—”I am here.” Isn’t that what we all desire—to be truly seen and loved for ourselves in any given moment? Howard embodied this ability to truly see others as is evidenced by the outpouring of love from so many people these past days. I think this is also what is meant when Howie is described as a southern gentleman. It was his ability to see you and listen gently. My father, Malcolm, Jr. used to say that a gentleman is exactly that—a gentle man. 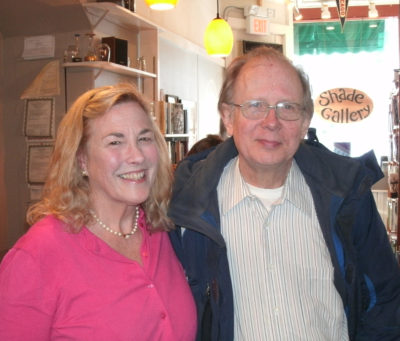 Reading at the Bookstore 2014

What I also recognized in Howard was the soul of a committed artist. When I began writing poetry and plays at the age of eight or so, my dream was to live what I imagined as the bohemian life of an artist and preferably in Paris, of course. Maybe that dream was in my DNA, maybe it was the desire to escape the sense of not belonging anywhere. I recognized in Howard a fellow dreamer of the artistic life. We were fortunate to have a great teacher of theatre at BSC in Dr. Arnold Powell. Arnie’s devotion to his art lit a fire in more than a few of us and his determination to push us to the highest levels of art is one of the reasons that Howie knew how to tell a good story and that is one of the things that made him such a great artist. Howard deeply loved his art, his craft and he worked at it diligently from an early age. He was always striving to express himself from the deepest places whether to amuse or to carry us along on a journey of exploration into the heart of darkness. 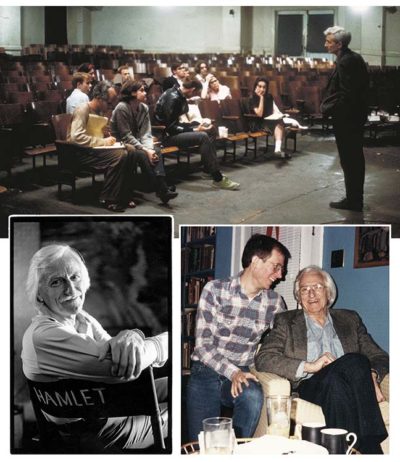 You cannot speak about Howie without speaking about his husband Ed Sederbaum and the deep love they shared for such a long time and, which, fortunately included many of us. I don’t know how many years they were together but it has to be close to 50 because I remember them together in the early days when we were all in New York. My memories of Ed from that time are of someone who was intellectually bright and politically outspoken as only someone from New York can be. It might have seemed an odd choice for them to be drawn to one another as their personalities were different and they decidedly came from different worlds. But it’s now obvious to me why they endured as a couple. Ed and Howard shared a core belief of what is true and just and they shared the love to live that truth. 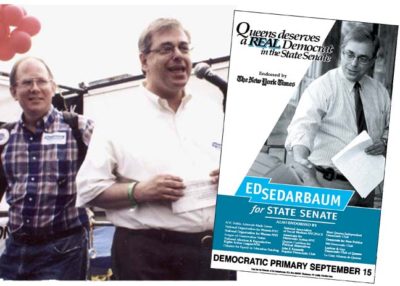 I love this photo of Ed and Howard. c from Howard’s website.

Whatever the fates reasoning I was lucky to be a part of their lives in the Berkshires as well since we all ended up there from “the City.” In 2004 when Massachusetts passed the law that made it possible for them to be legally married Ed and Howard were married in the backyard of their home in North Adams. I was there to witness that moment of the hard won right to celebrate their love legally in front of all of us and sanctioned by the Commonwealth of Massachusetts. Sitting among close friends and family as they stood in the bright spring sunshine in front of a large granite boulder thrown up from the New England earth during the ice age, I cried.

When Howie spoke of the casual conversation we had about Stuck Rubber Baby it was more than casual as I remember it. I remember him speaking about the difficulties he encountered in bringing this work to the world, about the difficulties with DC, about what it took for him physically and emotionally to create this piece and what he and Ed sacrificed financially to bring this into the world. It takes an elephant two years from gestation to birth and Stuck Rubber Baby was an elephant of a birth and it stands as a giant of an artistic statement. 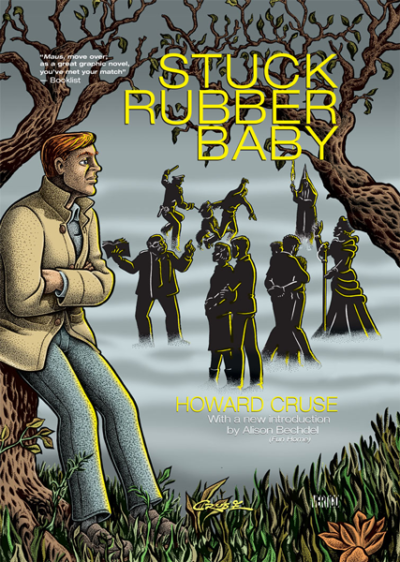 When one is outside what is considered “normal” it is not so strange that one is drawn to others who are on the outside as well. Ed and Howie have encouraged me throughout the years in my own work. Several years ago, Howie published a magazine called “The North County Perp” which contained an essay he coaxed from me about my search for my paternal grandfather, Major Malcolm Wheeler-Nicholson’s history. Ed took care of the details of editing and between the two of them they got a decent piece of work out of me. 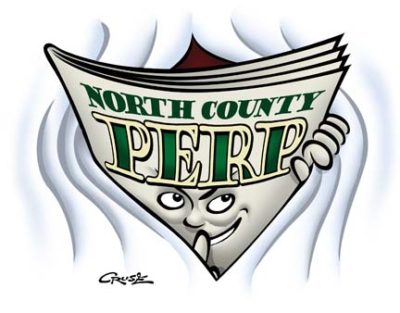 One of my favorite moments with Howie was in 2010 at San Diego Comic Con when Howie was a “guest” and I was struggling to find my way through the labyrinth of the comics community. Ed wasn’t able to attend so I was Howie’s “date” for the Eisners and able to be a part of all the surrounding events. I was a witness to the honor and attention he received that was beyond well-deserved. It was especially gratifying to see Howie at the DC booth meeting with fans and signing Stuck Rubber Baby with the 2nd cover and intro by Alison Bechdel. 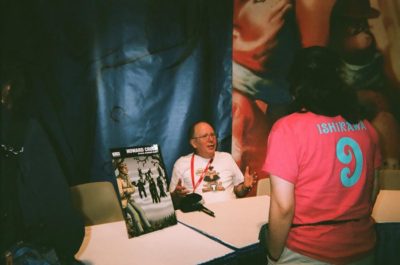 Howie drew the portrait of Major Malcolm Wheeler-Nicholson that is included in every published work I create about the enormous contributions to comics of my grandfather, the Major. The portrait is typical of Howard’s work—beautifully executed and with a sense of the youth and promise of an extraordinary life. It is no coincidence that these lives are intertwined in mine for they are both my family. 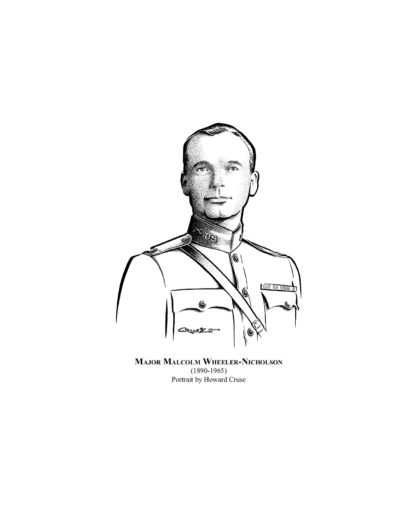 The Major by Howard Cruse

I’m proud of my work on DC Comics Before Superman and I’m grateful Howie witnessed this achievement because I could not have made it this far without the support of those I call family. I have witnessed moments of Howie’s life and he of mine. Witnessing has a special connotation in the south. The definition is to attest to something seen and so Sawubona Howie, I see you and you have seen me. I am here. How do you say farewell to over fifty years of friendship, love and family, of time spent talking of work and life, of events large and small, of Birmingham, Alabama, New York City, the Berkshires, San Diego, San Francisco and a lifetime of loving someone. In the end my friend, the love you take is equal to the love you make. This is for me and this is for Ed. I love you much.