Major Malcolm Wheeler-Nicholson, my grandfather, created a comic entitled Sandy Kean, Calling all Cars, Sandy Kean and the Radio Squad wisely shortened to Radio Squad. It was classic Depression era material. Sandy Kean, a detective on the police force answers the siren call and goes after the bad guys—mafia types who are preying on the little guys. Sound familiar? That’s because the Major gave the idea to Jerry Siegel and Joe Shuster and they ran with it. If ever there was a time to send out a call for all cars–this is it. 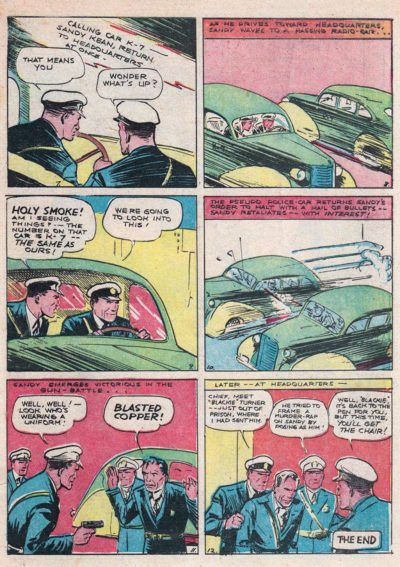 For most people in our country the Spanish Flu, World War I, The Great Depression and even World War II are vague events in the past. However, growing up in the deep south in the early 1950’s and mostly raised by my maternal grandparents meant that those events and the stories about them were still a part of the world I inhabited. Poverty in the deep south was quite prevalent in the 1950s due to the Great Depression and the aftermath of World War II. My grandmother Azolene’s first husband was gassed in World War I with the resulting pain eased by alcohol. Not too long after the birth of my mother Olive, he left, leaving grandmother with two small children to raise on her own. My great grandmother Agnes’s first cousin, Harriet, married James Irving Clarke, a successful New York City banker who served on the editorial board of the New York Sun. On January 22, 1919 in New York City, “Hattie” died from pneumonia at the age of 33 according to her obituary. My grandmother always said she died from the Spanish Flu. I was surrounded by people who were thrifty and careful, and had a knowledge of survival skills—gardening, preserving, hunting, fishing, sewing, basic repair skills and the like. One of the jokes said about my granddaddy Pickens, my grandmother’s second husband was that he could put anything back together but there was always a piece left over. Because of my grandparents and the family elders I spent time with, I was given a basic knowledge of how it is possible to face adversity and do so with grace and good cheer. 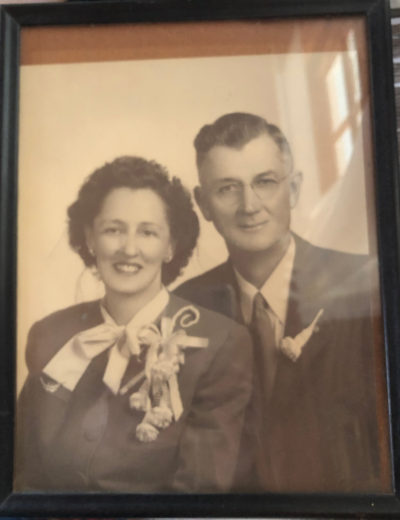 It was an easy transition to go from the family stories of the maternal side to searching the life and work of my paternal grandfather–the Major. I already had a familiarity with some of the historic events of his life. Since my mother’s family had been involved in publishing for generations, that too was familiar territory to me. About 20 years ago I began earnestly working on the Major’s bio off and on between paying work. The worst setback occurred in early 2017 when my co-author, a well-known writer blew up his life and subsequently my project in a plot twist worthy of film noir. I never saw it coming. I thought we were finally on our way after 7 years of his inability to move forward with it. Thank goodness he had not written anything other than the book proposal. 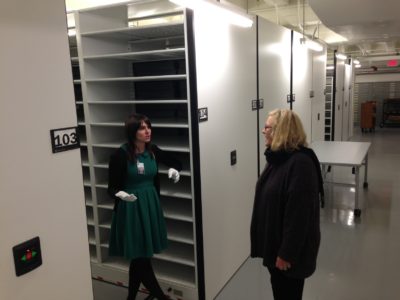 Research at the Billy Ireland Museum with Caitlin McGurk. 2013

In response to that adversity and my need to call all cars, my heroic pal David Armstrong showed up and we worked with Dan Herman of Hermes Press to publish—DC Comics Before Superman: Major Malcolm Wheeler-Nicholson’s Pulp Comics. I figured if I did a shorter version of the Major’s story along with a substantial number of pages of rarely seen comics that would indicate I could do a book on my own that would excite interest. David curated the comics and without him, the book would not have happened. I’m grateful to Dan for producing a beautiful book. In spite of support from a number of people in the industry the book has not yet gotten the attention it deserves and the particular kind of attention that would have helped sales such as nominations for important industry awards. For a freelance writer like me, sales are crucial not only for financial survival but for continued professional opportunities. The good news is that although I didn’t achieve the necessary financial support I did find an agent and I’m well on my way with the full biography with the expectation I’ll have a full manuscript before the summer is out. 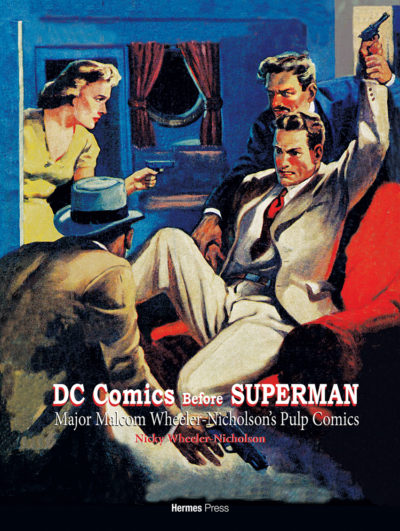 The other “Major” event last year was persuading DC to buy a rare copy of the Major’s first comic New Fun #1. DC surprisingly heard me and did indeed buy the comic for the archives. That precipitated their plans to publish a special anniversary edition to appear in January 2020, the 85th anniversary of DC Comics and coincidentally the Major’s 130th. I was asked to contribute a bio of the Major and bios of the creators. For the first time I felt that DC was beginning to fully acknowledge the Major’s contributions to the founding of DC. The project was a labor of true love despite the usual behind the scenes dance with the powers that be at WB/DC. And if you don’t think there is a constant dance with the powers that be—where have you been for the last 82 years? 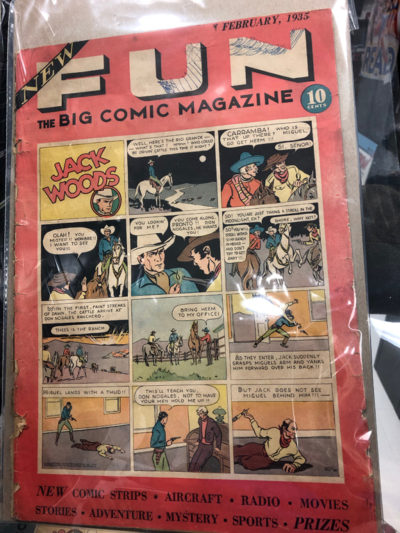 I always want DC to do well because it was my grandfather’s vision. There are a number of talented and good people at WB/DC that I enjoy working with. There is also the corporate entity/personhood who lumbers about like some badly crafted Frankenstein and who often shows poor judgment and forgets basic human decency not to mention protecting the creators—the people who are the foundation of all product manifested. Maybe someday that monster will be corralled. In the meantime—shall we dance? 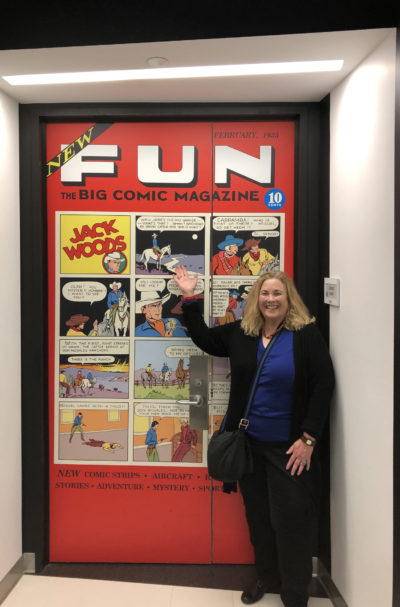 The January release date for the New Fun edition didn’t happen and it was then scheduled for late March/early April when another plot twist arose–this time silent and deadly as if from a science fiction movie. First the virus hit China then began its spread across the planet. In the meantime, it wasn’t clear where the physical books for the New Fun edition were nor when they might resurface—on a slow boat from China? No one knew. Several days ago, I got an email that enabled me to see the book digitally on Comixology.

My life has not been easy these last ten years or so and within the last three years it has become, at times, almost unbearable. All the constant effort with little return finally came to a denouement with the virus and the difficulties surrounding it. I’m worried that we are in for a rough ride—a combination of the Spanish Flu and the Great Depression rolled into one giant disaster. I confess I lost heart. It took several days before I could bring myself to look at the digital copy of the anniversary edition. I finally opened it up on my computer and when I saw it, I burst into tears. 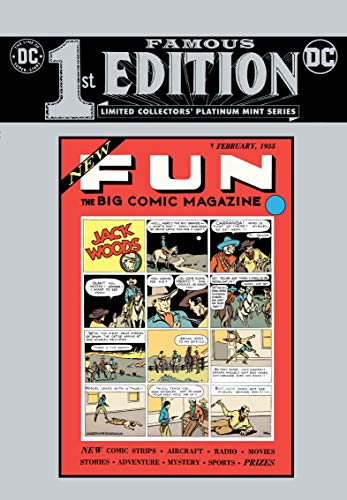 If the hard cover is anything like what I could see on my computer the anniversary edition is one gorgeous and beautifully crafted book. I am grateful to everyone who made it happen—Wayne and Jay, Benjamin, Roy Thomas and everyone else at DC who contributed. I am mostly a positive person who prefers happy endings. Here’s the epiphany I had when I saw the book—within the midst of this dark time we are all experiencing, the past–like a parallel universe–is close to us. We have the opportunity to see the past in the present. It isn’t just a fact that the Major created his comics company that continues to this day but it is a reality that he did so against unbelievable odds during another dark time in our history. Yet he had the courage, the vision and the energy, in spite of all the difficulties and lack of funds, to bring that vision to earth, to put it on paper and finally on newsstands, to put that vision out into the world. Knowing how you feel right now, ask yourself if you have the foresight to dream of something huge and way beyond yourself? Could you do something on that scale at this moment, something so ground breaking, so innovative? That is what it took to start DC Comics. 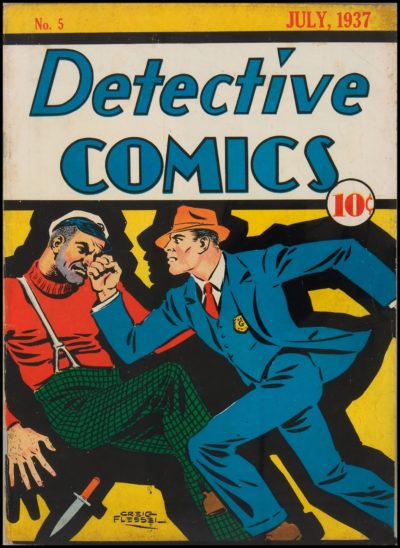 The Major did not accomplish this alone. He gathered a legendary group of creative people who joined in. Comics is a collaborative medium. And I cannot bring this story out into the world on my own. For many years I’ve poured heart and soul into making the Major’s story more widely available to fans, to academics and historians, to the people who drive the industry—publishers, journalists, comic conventions, and comic book stores. It hasn’t been easy but I’ve been fortunate to have a solid core of people who have been unswerving in their devotion to the cause. I’ve been calling all those cars for a long time and they have been there each time. And sure enough, Barry, Jim, Don and many of the other guys were on the case immediately, sussing out when the hard covers would arrive and who else had them besides the behemoth Amazon. They are the best of the best and they lift me up every. single. time. 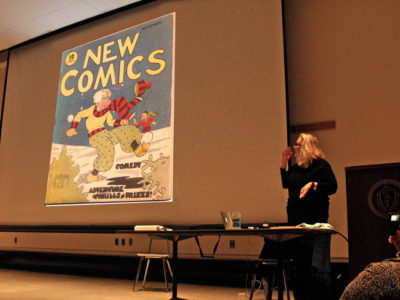 So once again, I’m calling all cars. It seems unlikely that DC will do much promotion and so it will be up to me and to all of you who have been there on this journey with me to help get out the word about this beautiful book and the Major’s story. Please write reviews, bring it to the attention of the influencers, to the academics, librarians, historians and fans and encourage them to learn about the beginnings of the foundation of the industry we all love. It’s past time for the true history of DC to be told. And while you’re at it, remind them to take a look at DC Comics Before Superman. They might discover something new! 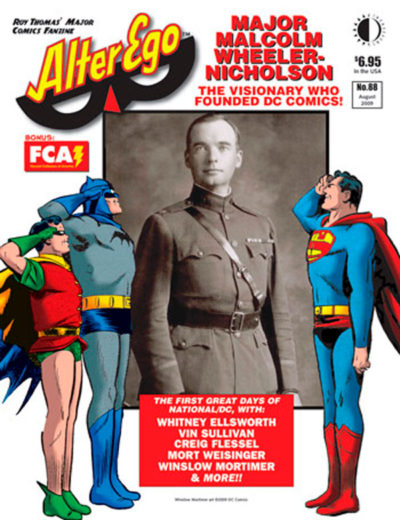 Why is the anniversary edition of New Fun #1 important? Without a knowledge of the past, we are not on firm footing in the present nor can we go forward with confidence in the future. It is also important in these difficult times because we can take heart from the beginnings of the industry—from the brave lives of the contributors and their creation of heroes who became superheroes, heroines who became wonder women and all the talent and creativity that flows through these comics. That can be our guide forward. DC has the opportunity in this dark time to stand on its firm foundation and be true to its best talent and its strong characters and their imaginative stories if they have the courage and vision. 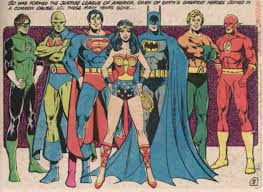 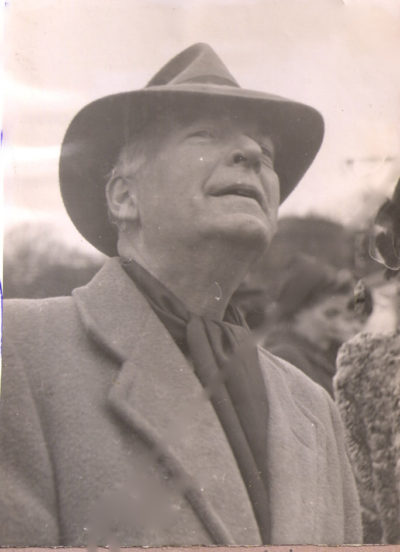